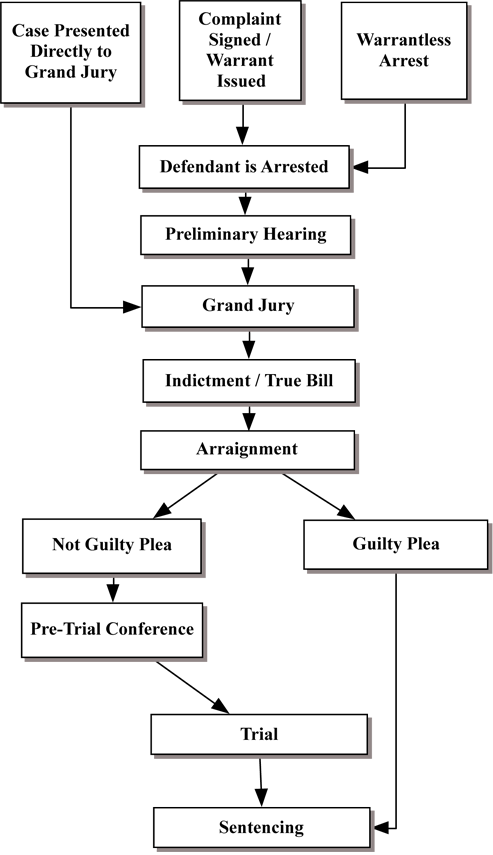 Arraignment:
The formal hearing where the accused enters a plea of guilty or not guilty.
Bench Trial:
A trial in which the Judge is the finder of fact, not a jury.
Bound Over:
When the case is transferred from the District Court to the Grand Jury.
Bond:
The mechanism that allows a defendant out of jail pending his/her trial.
Bond Revocation:
If the defendant is accused of violating any conditions placed on the bond order that allows the defendant out of jail, a hearing takes place to determine the consequences (usually return to jail).
Contempt of Court:
When a person violates a civil order of the court.
District Attorney’s Office:
The office that prosecutes all felony cases and county misdemeanors on behalf of the State of Alabama.
Defendant:
The person who is accused of a criminal act.
Defense Attorney:
The attorney for the person accused of a crime.
Discovery:
The term used to describe the official procedure for a defendant or their attorney to obtain legal information about the State’s case.
Deferred Prosecution Programs:
Programs for defendants who are first time offenders for certain crimes. Successful completion would likely result in the dismissal of criminal charges.
Grand Jury:
A jury of 18 people who hear evidence presented by the District Attorney’s Office regarding felony charges. The charges are drawn on a document called an indictment. It is the legal mechanism used to determine if there is enough probable cause to move a felony case from District Court to Circuit Court for a trial.
Habitual Offender:
A person who has a recidivist record will be identified as habitual offender and may face enhanced punishment.
Indictment:
A formal charging document that is produced by the District Attorney’s Office through the Grand Jury and is submitted to the Clerk of Court as the official charge(s) against a defendant. These are the charges that the State is required to prove in a trial.
Jury Trial:
A trial in which a jury of peers is the finder of fact.
Motions:
Procedures in which the prosecutor and defense attorney argue in front of a Judge about what specifically is and is not allowed in a pending trial.
No Bill:
The term is used when a Grand Jury does not find sufficient evidence to proceed with charges against a defendant.
Nolle Pros:
The procedure in which the prosecutor may dismiss a case after charges have been filed with the Court.
Preliminary Hearing:
A hearing in front of a District Court Judge to gain more information from the parties involved as it relates to probable cause.
Probable Cause:
The measure of standard required before a District Court Judge can bind a case over to Grand Jury or issue a warrant.
Probation:
An alternative to jail that often includes various conditions that the defendant must comply. Often times involving counseling and/or treatment.
Probation Revocation:
A hearing to determine if the defendant has violated conditions of his/her probation and subsequent consequences.
Prosecutor:
The attorney for the State of Alabama.
Reasonable Doubt:
The level of proof required by the State to prove the charges at trial.
Restitution:
The amount of money the Judge orders the defendant to pay at sentencing to reimburse a victim for out of pocket expenses.
True Bill:
The term is used when a Grand Jury finds sufficient evidence to proceed with charges against a defendant.
Victim Compensation:
A State of Alabama program which provides financial support for victims of crime for out of pocket expenses related to a crime. Types of expenses can include: medical, funeral, mental health, lost wages, and loss of support.

Please provide as much information as possible:

Click here to see who has an outstanding
ARREST WARRANT